The design of homes is drastically evolving into a new norm with the role of space for living, working, exercise and even holiday in them. Constructions designed in the form of multifunctional buildings are increasingly used as multipurpose homes with multi- hyphenate spaces for living and working, solved in response to the needs and problems of the modern ways of life.

The published project solution presents a complete modification of an existing industrial building transformed into the so- called multifunctional family house, not only as a place to live, but also as a facility for daily work. The building consists of two floors, which we functionally separated into a lower floor for working and an upper floor for living.

The main challenge on the upper floor of the house interior was to functionally solve the existing open type space and divide it into separate rooms for living zone, cooking area, dining room, as well as two bedrooms. The newly designed wall in the living room divides the space into separate rooms. It is accentuated and decorated with a wall panel composed of wooden slats, harmoniously arranged to form a decorative Chevron pattern, which gives a feeling of luxury in the open space with its eclectic structure and wooden design. The fireplace is a focal point in the space that radiates additional heat in contrast to the visually cold central wide pillar on which it is mounted. The pillar is covered with a Calacatta stone, that brings freshness and purity to the living room. The overall composition of the wall with the natural materials used as décor in the space reflects the nature with its different types of materials, whose incorporated energies create a cohesive unity and harmonious balance in the home.
The dining room is equipped with a round table for easy circulation in the space. The wall is decorated with metal decoration, made of enlighten copper, engraved with an olive tree motif. The olive is repeated as a decorative element throughout the interior and it is inspired by the name of the owner of the house. At the same time, in many cultures, the olive tree is a symbol of various spiritual values ​​such as blessing, fertility and health, while its grown roots in the ground are a symbol of stability, peace and tranquility. In addition, the olive tree symbolizes the eternal connection between the Man and Earth, which idea is used in the project to mark the long- term relationship of the owners with their home.
The kitchen is positioned at the beginning of the open space plan, which makes it easier to bring groceries into the home. It is designed in a combination of light and dark tones for visual balance of the cooking zone.
The entire interior of the upper floor is illuminated with a large amount of natural light that enters through the large door- windows that were retained from the previous condition of the building. Additionally, the natural light plays through the space by regulating the existing Venetian blinds, and the overall impression of the interior is rounded off by sloping ceilings that fall slightly above the entire upper floor. 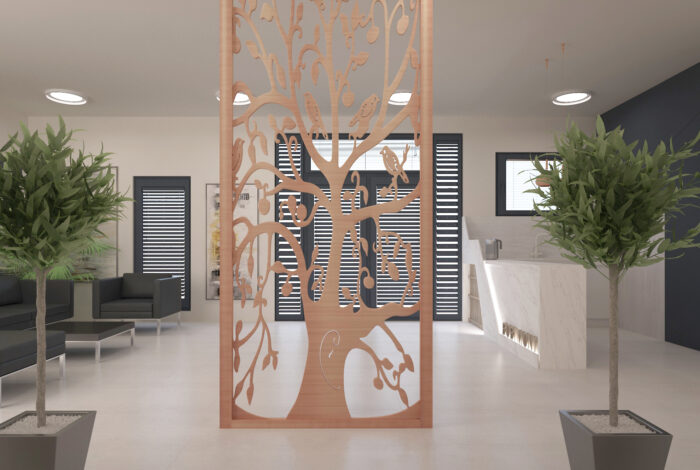 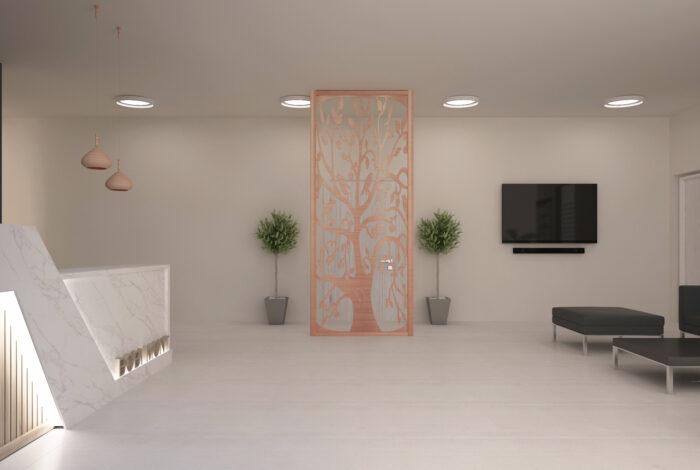 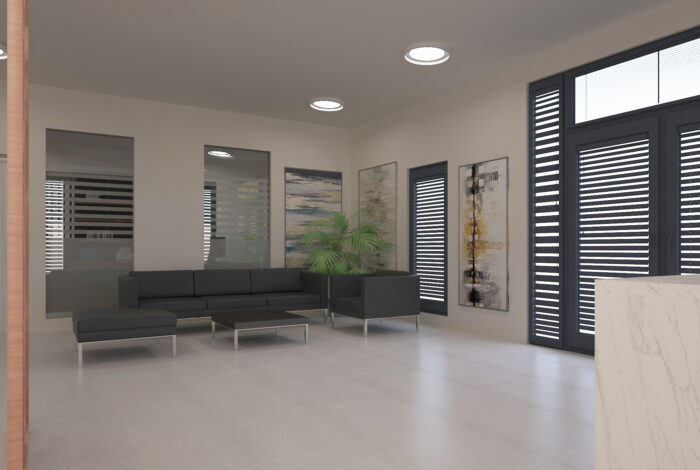 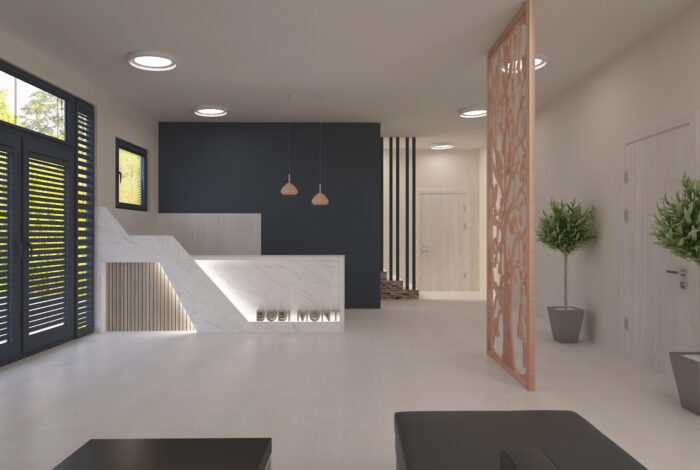 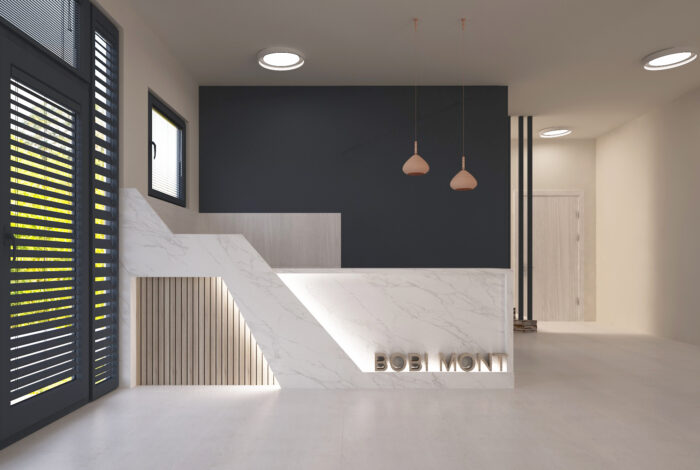 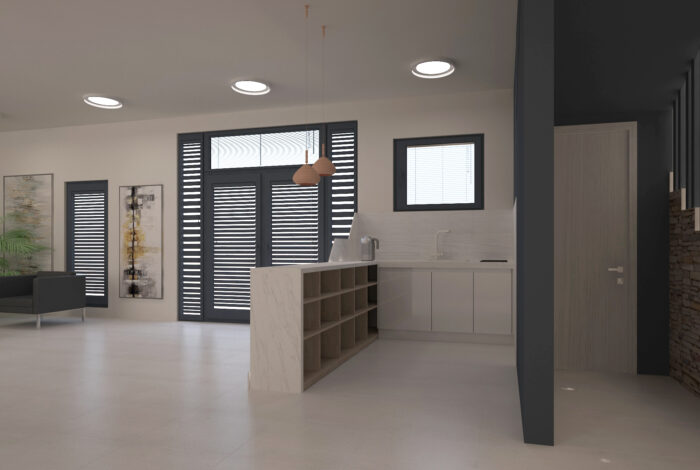 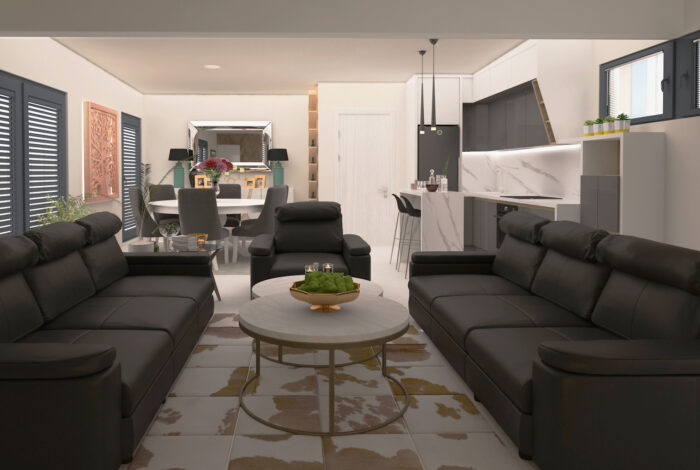 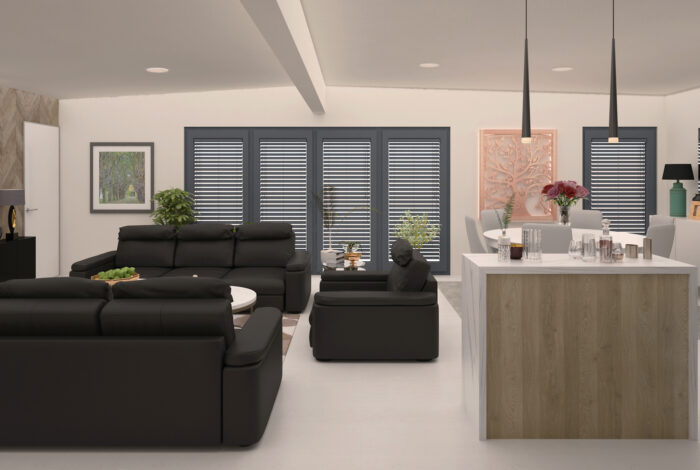 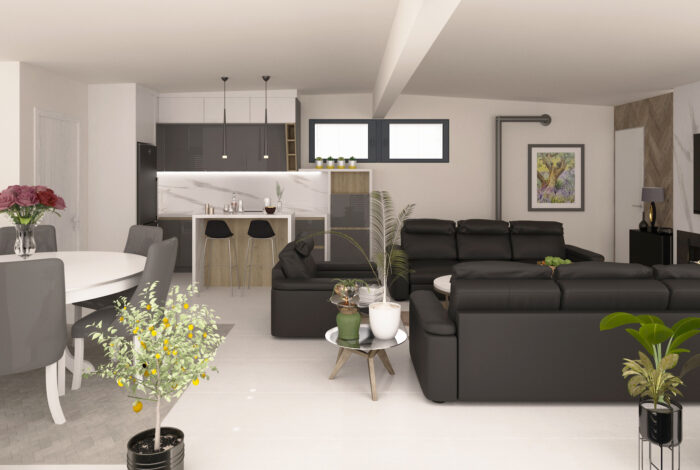 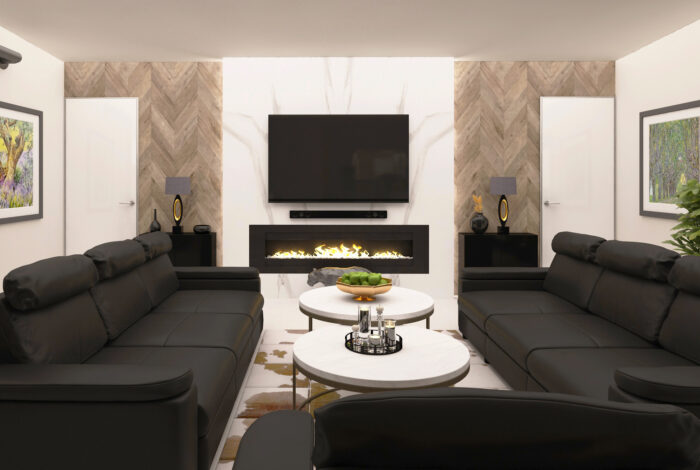 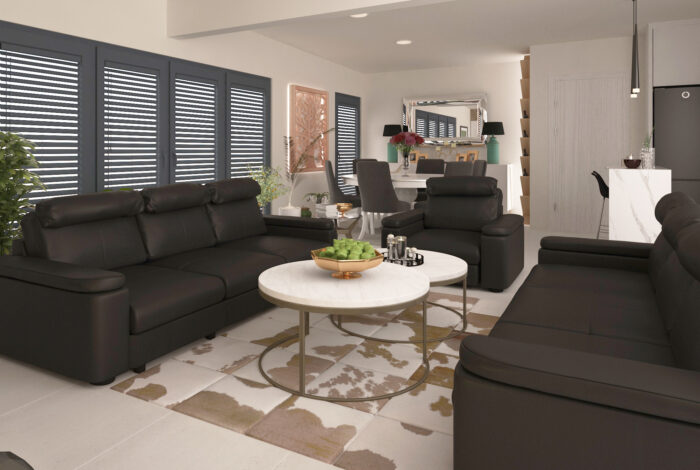 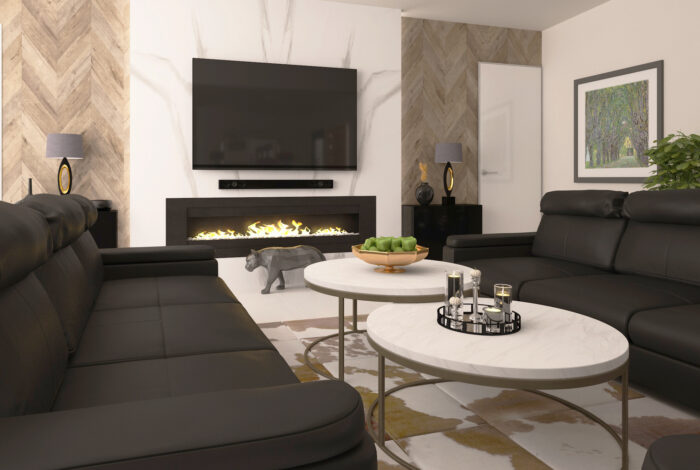 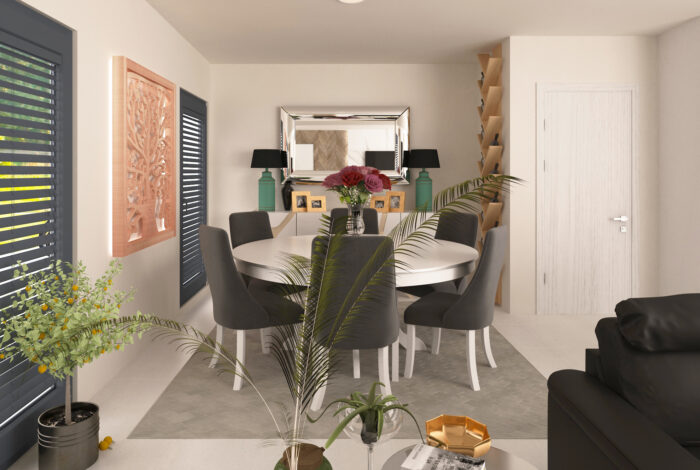 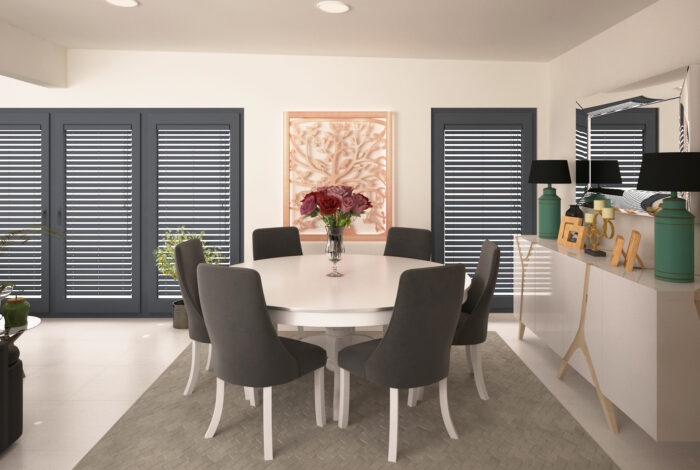 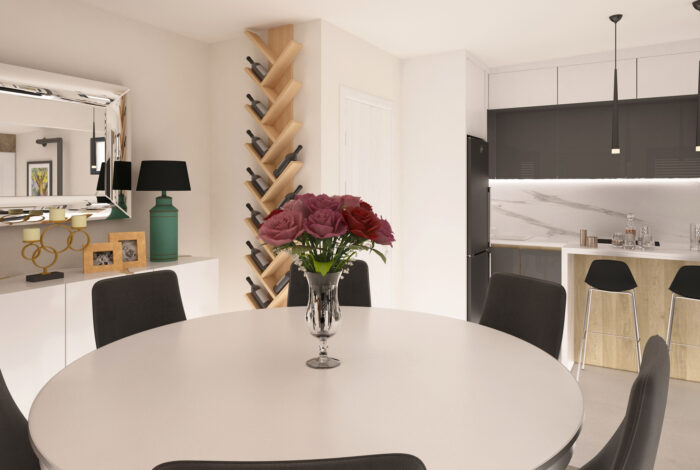 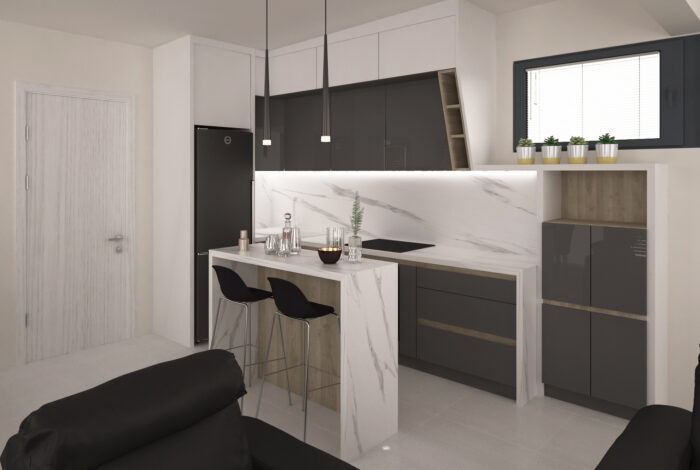 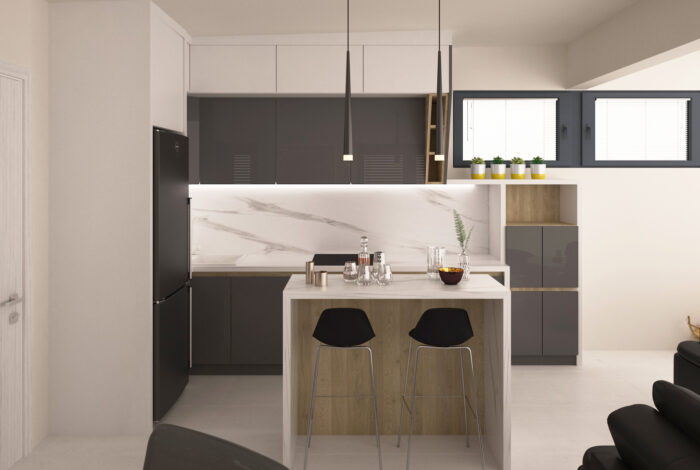 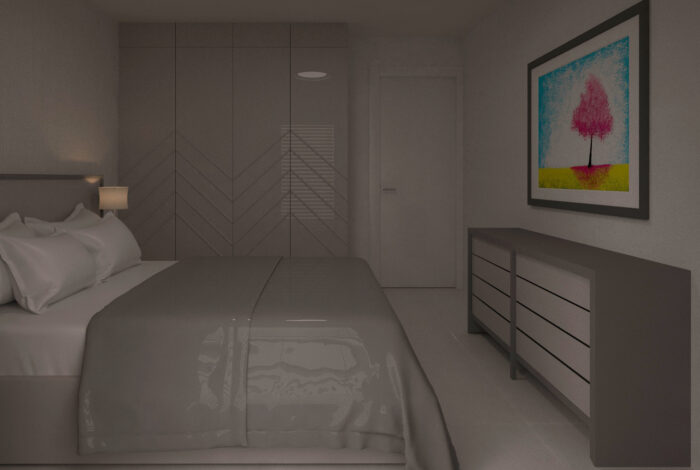 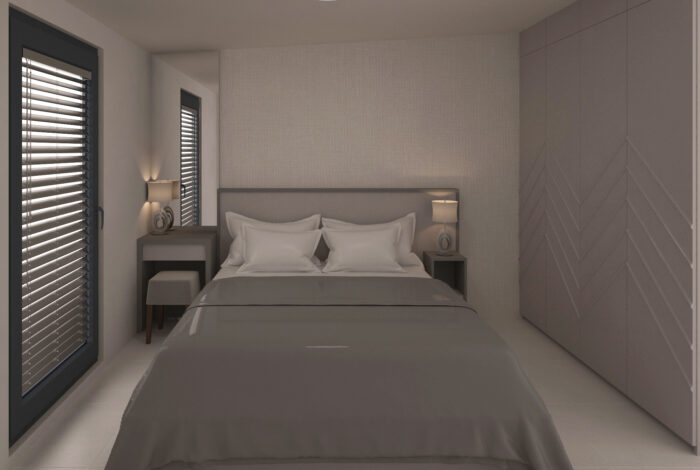 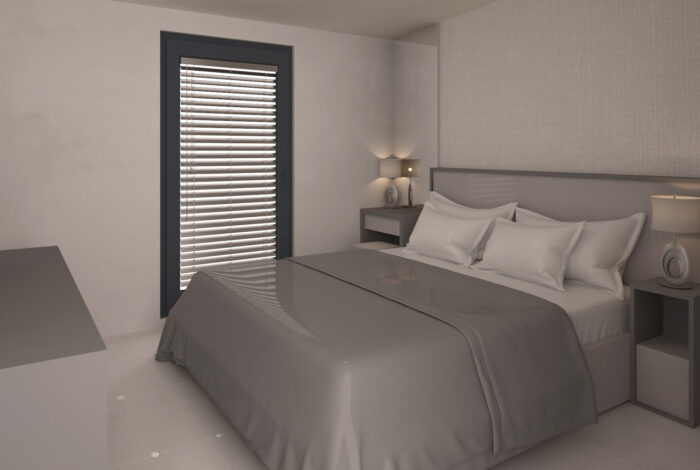 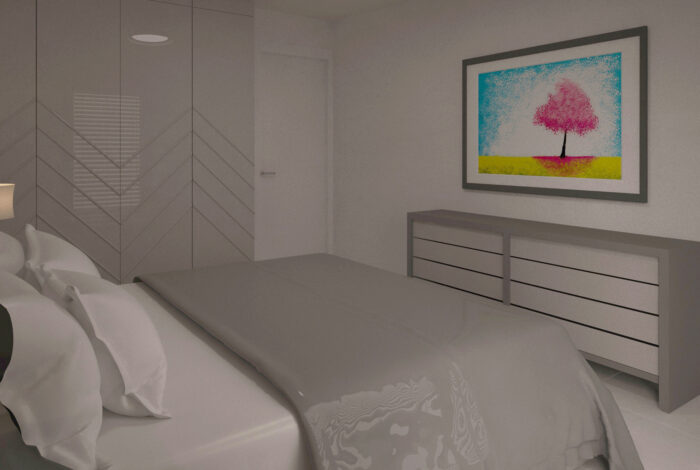 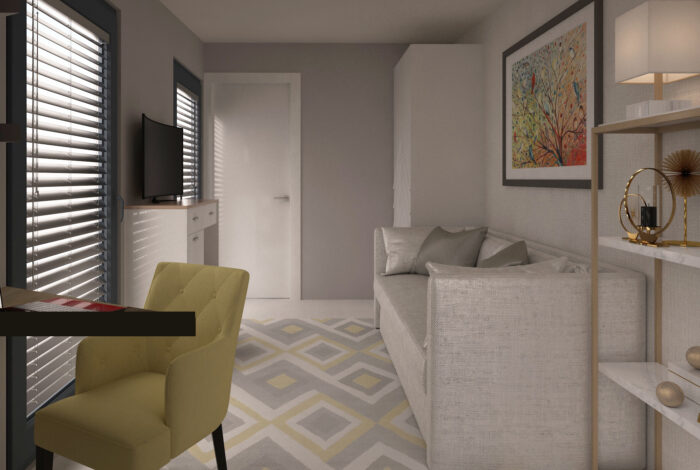 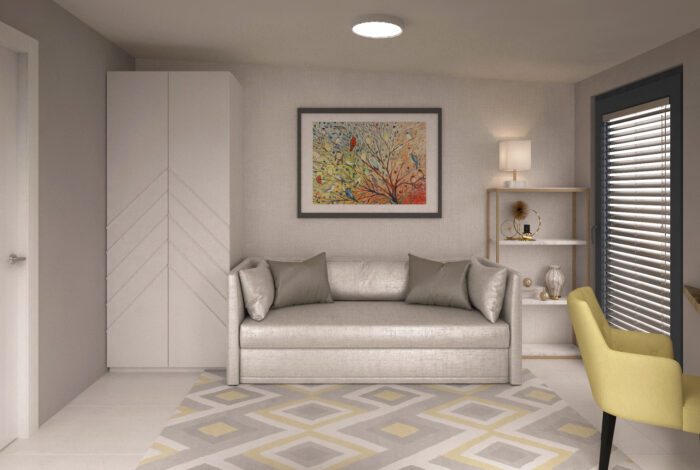 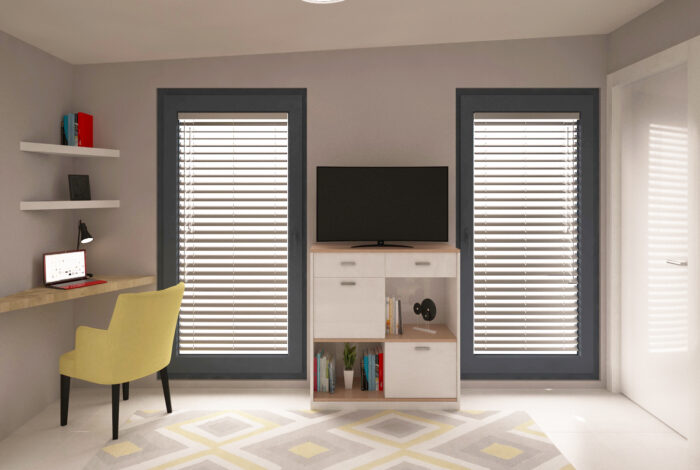 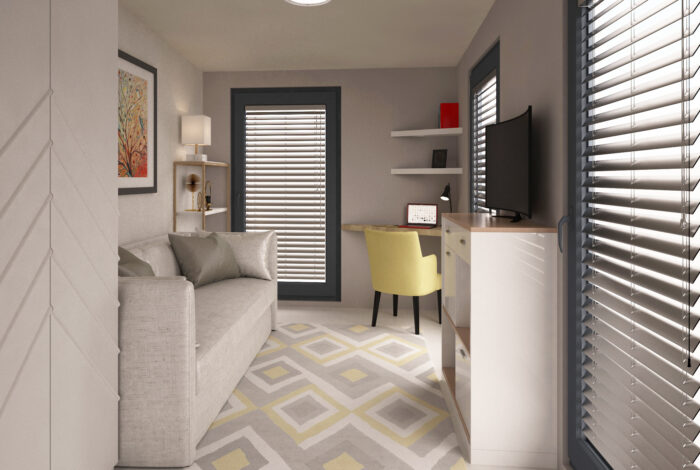